So how many times have you driven down a residential type road and suddenly thought to yourself, oh! What is the speed limits on this road?
It is really important to always be vigillant on seeing the speed limit of roads. As some residential areas are sometimes not 30 mph limits and can be say 20 mph. More and more of our residential areas are becoming lower in speeds to combat and prevent casualties.
Playing safe and doing 30 mph is something you may do to try and be safe and above the law, but it may be something that can become unsafe if the speed limit is actually lower than this.
There is a little matter in the law to take into account and not knowing the speed limit will not be taken into consideration if you are caught out speeding unwittingly

Speed limit signs are put into place for a reason and some of the rules and regulations that you may not know are posted below for your information.

Goods vehicles and buses have a different limit on these roads for these limits see (Highway Code Rule 124.)

The speed limits on single and dual carriageways are not defined by the number of lanes, but rather by the presence of a central reservation.

If the carriageway is not separated by a central reservation (and has a national speed limit sign), then the speed limit for cars and motorcycles, regardless of the number of lanes, is 60 mph
If the carriageway has a central reservation and at least one lane on either side of it going in opposite directions, then the speed limit for cars and motorcycles is 70 mph.
Far too many drivers are not aware of these speed limits and driving too slow or fast in these areas and can be a potential danger to other motorists.
Remember driving too slow for the conditions of the speed limits can make other motorists become annoyed and begin to drive erratically to a point of making a miss judgement while trying to overtake therefore creating unsafe and potential dangerous situations.
Remember the maxumum speed of a road are not targets and you are allowed to raise your speed up to these limits if conditions are suitable and safe to do so. Take into consideration things like the time of day, weather conditions, volume of traffic and unsighted areas such as bends and rises in the road then drive at a suitable speed to accommodate these variations. Good and safe drivers do not speed around bends at 60 mph just because the speed limit is 60 mph on that road.
Do take into account these conditions and regulate your speed accordingly.
It’s a driver’s responsibility to know the speed limit for the road they’re using. Wherever a speed limit changes there will be speed-limit signs (and sometimes it’s painted onto the road too), so stay alert and look out for them.

Speed limit sign locations are usually situated in some of these types of areas below.

This list is just an example of areas where speed limit signage are situated. 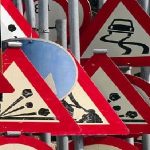